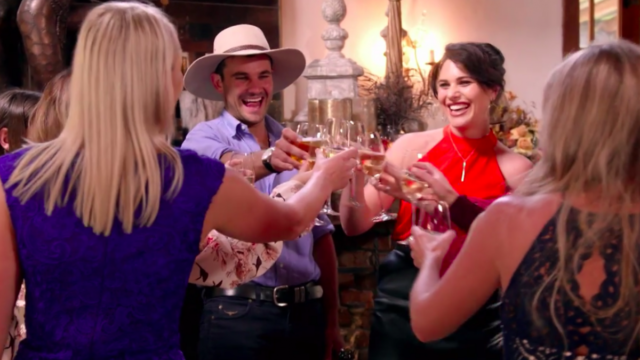 It’s pegged as Australia’s most successful reality dating show, but what is it about Farmer Wants a Wife that gives it the high-brow, true-love status above the likes of MAFS and The Bachelor?

The show’s host says it’s the down-to-earth nature of the fellas at the heart of it all.

Oh, and the eight ladies who vie for each of the five farmers’ affections.

“Everyone is there for the right reasons and it’s good old-fashioned romance and real love stories,” Gruzlewski told The Morning Show.

For anyone who’s confused about the premise, it’s this: A fair dinkum farmer just wants a wife. So a handful of girls are brought out from the city to the countryside to see if there’s any chance of true-blue love.

The glamorous rose ceremonies are swapped for early morning feed runs; the dramatic dinner parties are nowhere to be seen – but you’ll find plenty of mud and cow muck.

When the 10th season of the Australian edition premiered on Sunday night, there was gush upon gush of just how successful the platform is: The previous seasons boast nine marriages and 20 offspring.

We’re welcomed to this season with sweeping views of a manor that has been the starting spot for many great romances (apparently).

This season’s great romances begin way before this, however, when our five farmers were given the profiles of hundreds of ladies to flick through and select eight they’d like to meet in person.

And here come the ladies, bringing with them tales of woe and heartbreak and “city guys”.

These city guys, we’re told, can “taste every chocolate in the box if they want, and why would they stop at one”, heralding the start of the demonising of the urban man and the fetishisation of the farmer, akin to the lumbersexual period of the mid-2010s.

You’d think these girls had seen Jesus Christ himself the way they’re reacting to the farmers. #FarmerAU pic.twitter.com/7j2LW0dhMO

Once the dames are assembled jauntily into their pre-picked groups (and when you’ve got eight ladies hand picked by one man, can’t you just tell when someone has a type?) we meet the lads.

Our hopeful farmers this year are …

Alex, 28, a cattle farmer from Queensland who describes himself as a “love virgin” who’s “100 per cent balls against the wall ready to fall in love”.

Farmer Neil has chosen Karissa, Chantele, Megan, and Justine to come back to his farm. 💕 Will he get a second shot at love? #FarmerAU pic.twitter.com/Wi8Rjm6Wmv

The commentary means we will not soon forget that Neil’s only defining character trait is that he’s been married before.

Then there’s farmer Harry, 28, also from NSW, who’s featured heavily in the promos painted as the kind of rough diamond most “city guys” should be afraid of.

Farmer Harry has asked Ashleigh, Madison, Karlana and Stacey to join him back to his farm. 💖 Will sparks turn into a flame? #FarmerAU pic.twitter.com/Ga7bKMb7Rh

For some reason, every sentence Harry comes out with are the funniest three words ever spoken in a room full of women.

Nick, 44, from Tasmania, presents as the ideal bachelor – he owns a vineyard. He’s also our oldest farmer, and the farmer who’s been given the token Dolly Parton lookalike.

Farmer Nick has invited Marnie, Liz, Naomi, and Emma to join him at his Tassie winery. 🍷❤️ Will true love blossom? #FarmerAU pic.twitter.com/IsNJKmWLGM

Farmer Sam has picked Sophie, Riley, Emily and Kirsten to join him at his home. 🥰 Is this the beginning of his forever? #FarmerAU pic.twitter.com/sQuBgwRVlJ

And so we viewers are invited to join in on this whirlwind romance, in which each farmer must go on a date with each of his eight chosen dames individually, before choosing just four to take home to the farm. (To continue to get to know, and perhaps use as cheap labour. It’s been a dry season and there’s bills to pay.)

As the dates progress we’re told countless times how the women are just ready to find a man, settle down and start a family, and heck, why not do that in the country?

(One lady confesses she’s never actually been to a farm, but she has been to a simulated one, which sounds very fake and nothing like a real farm.)

The unforgiving lifestyle of a professional farmer is somewhat skimmed over, as cutaways lead us to believe a farmer’s life is just endless days walked up and down paddocks until blue skies, and sitting on a hay bale watching a sunset with your favourite cattle dog.

Anyone else feel anxious while watching #FarmerAU ? I think as someone who married a farmer… I have flashbacks of being “brought back to the farm” where you are somehow meant to know how to a catch a sheep and drive a tractor 🤦‍♀️ Good luck to them!! 😬

The glossy ride of women looking to find the love of their lives, and farmers looking for “a chick” switches gears when we discover one of the contestants is a Christian who doesn’t believe in sex before marriage.

This is apparently the sauciest secret the producers can find among these 40 women.

We can expect this to be turned into a huge plot line (and no doubt a morning TV show talking point), as we’re shown snippets of the other contestants in her group saying she “simply must” tell farmer Alex of her situation – it’s only fair for him, and the other girls, you see.

Of course she does not tell him in the first 10 minutes they spend alone together, and of course, she is chosen as one of her farmer’s four ladies to continue the quest for his affections.

The fact this is the only controversy of episode one (apart from farmer Sam saying “I didn’t think much of her when I first saw her … but then when I got to talk to her she’s got a really beautiful personality” in describing a contestant) does go some way to demonstrate how Farmer seeks to differentiate itself from the botox-enhanced drama of Married At First Sight.

Despite its wholesome mantra, it can’t shake the inauthenticity that reality dating shows have seeping from every pore of every character, whether they’re truly looking for real love, or just a real shot at becoming a D-grade celebrity.

But we’ll still take bets on how long it takes for the women to realise packing any item of white clothing was a disaster waiting to happen.

The post <i>Farmer Wants a Wife</i> is trying to bring back wholesome reality TV appeared first on The New Daily.