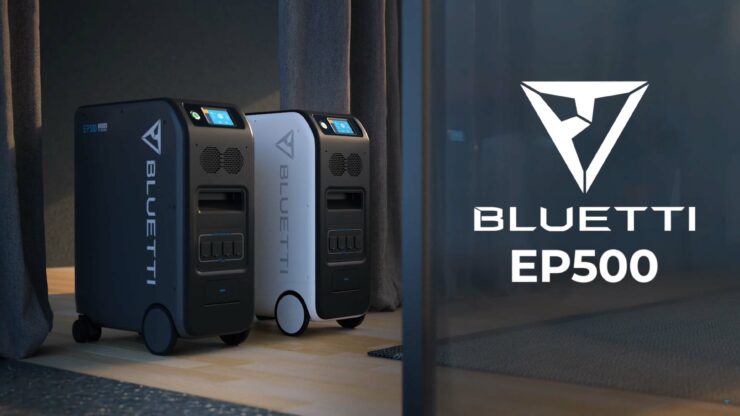 As an innovative pioneer in the renewable energy industry, BLUETTI established its name in the off-grid power world with cutting edge, reliable power station product lineups.

In addition to medium and small size portable power stations, they are also dedicated to research and development of high-power,  large-capacity solar battery storage products. 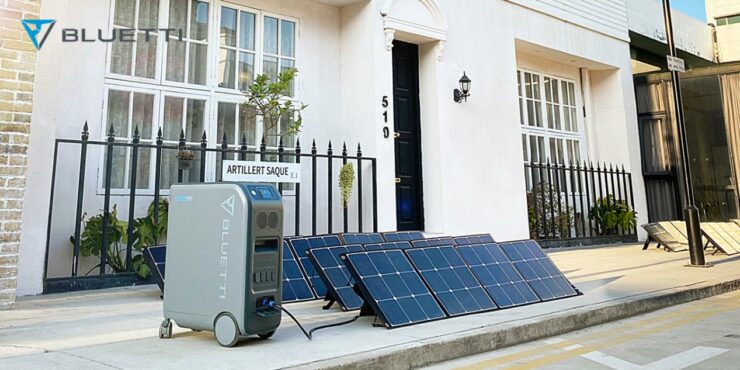 In July 2020, Bluetti made the initial move to replace traditional gasoline generators with their ground breaking AC200.   The AC200 features a 2000 watt rated inverter with 1700 watt hour battery capacity, a large array of outlets (including a ground breaking 25 amp 12 volt outlet) and up to 700W solar input with advanced built-in MPPT controller. The AC200 raised over US$6.8M on Indiegogo and changed the game in the portable power market immediately upon its release.

Upon crowdfunding completion, a follow up retail product the AC200P, with increased battery cycle life and LiFePO4 chemistry kept the legacy of AC200 while adding product improvement.   The AC200P is loved by van-lifers, campers and RV travelers and people, those who are subject to frequent power outages. The AC200P has also been well received by those who want an integrated all in one solution to short or long term emergencies that result in the need for continued power supply for their homes.

6 months later, the BLUETTI Team is back with a brand new, finely engineered and crafted product with ground breaking capacity: The EP500 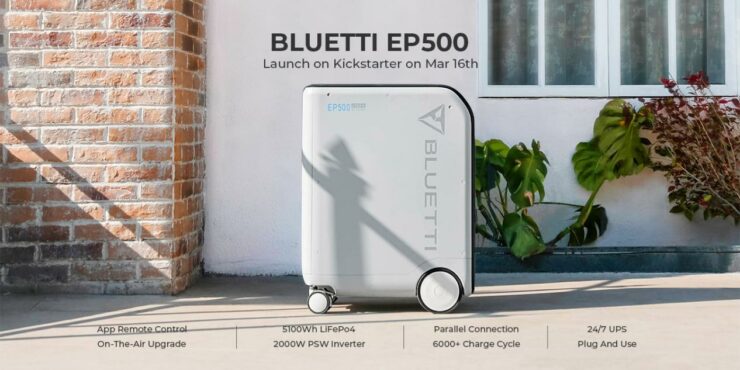 The EP500 contains a massive 5100 watt hour LiFePO4 battery pack that has more than 6000 charge cycles.  The AC inverter is rated for 2000 watts of continuous output power with a surge capacity of 4800 watts.  This inverter appears to be the same high quality and reliable unit being used on the highly successful AC200P.

The EP500’s elegant, minimalist design with massive capacity reminds us of the first-generation of Tesla’s Powerwall. With the four smooth rolling transport wheels, the EP500 is not meant to be large solar battery mounted on the wall or garage. The BLUETTI EP500 is designed to be a” no Installation needed”, plug and play product that can easily be moved to the desired location when needed.

Whether you use it as a seamless UPS home backup, or as an off-grid emergency power supply, all that is required is a press of the power button followed by activating the AC/DC switches and connecting the appliance(s) you want to power.

Compared to the long installation lead times of energy giants like Tesla or Sonnen, which take months or more than a year to make an appointment to install, the no-installation-needed BLUETTI EP500 is a game-changer in the large capacity solar battery market. 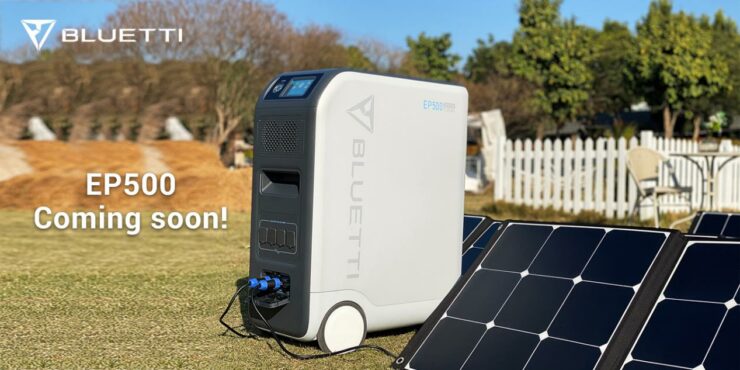 The rated AC inverter output power of 2000 continuous watts is high, but certainly not enough to power all of your electrical appliances. As an emergency energy storage power for the whole family, Bluetti has an option to double the AC output. For higher power loads, Bluetti is releasing its own “Fusion Panel terminal board”. With this accessory board, users can connect two EP500s in series, to double the rated 4000 watt power output.  The Fusion board will also will also offer the option of 220/240 volt output to power 220 volt appliances.  The high power output means you can now run your home air conditioner, clothes dryer, in-wall Electric Heater and other high power appliances with ease. No need to worry about power outages on a hot summer nights or cold, bitter winters anymore.

To monitor and operate remotely, the BLUETTI EP500 now supports remote App With their exclusive B-Lynk connection technology, you can easily monitor your EP500’s status and adjust settings it whether it is near you or a thousand miles away. No more having to walk to a unit to determine remaining battery or inverter capacity.

Equipped with the highest-capacity battery pack ever in the BLUETTI lineup, the EP500 also features powerful solar charging capability with up to 1200 watts input through its built in MPPT input.  With prime sunlight, it takes only 5 hours to fully charge with solar input alone.  The EP500 can be also charged at 600 watts input through and AC wall outlets. A built-in AC adapter is included so you can charge it with only a single AC power cable without needing a separate heavy power brick. 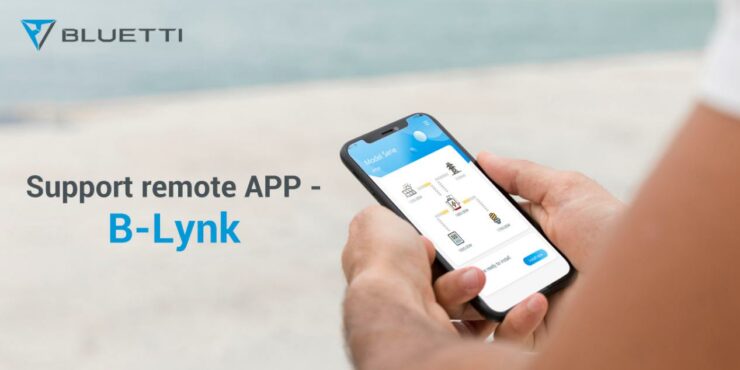 Still want faster charging?  This class leading unit can be recharged at up to 1800 watts (1200W+600W) by using the two input ports simultaneously. Charging using both ports at the same time results in fully charged batteries in only 3 hours.

Last, but not least, except for the detailed specs and a explanation of new functions, there are two more questions that many people will be concerned about: How long can I operate my items and how does the after-sales services function for the BLUETTI products? 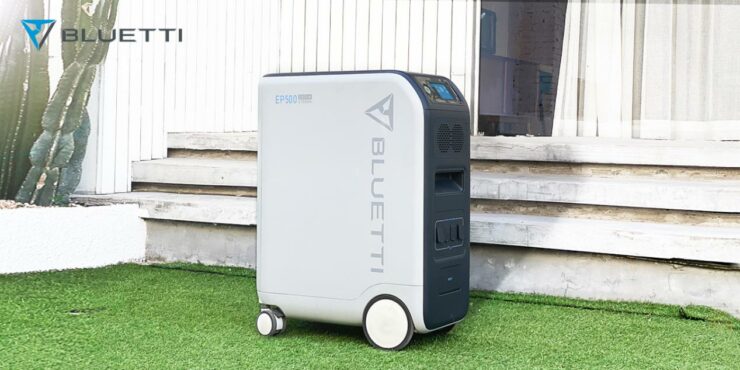 According to official information released, the EP500 is shipped with BLUETTI’s exclusive customized, long life LiFePO4 battery cells.  The self-developed battery management system including the battery pack has a maximum 6000+ charge cycles. According to the average household electricity consumption of 3kWh per day, the BLUETTI EP500 can achieve up to 40 years of theoretical service life without using any grid energy! In addition, BLUETTI also provides a 5-year warranty and lifetime technical support for this market leading EP500.  From what we can tell with current consumers’ feedback, BLUETTI is trustworthy in terms of after-sales service and support. 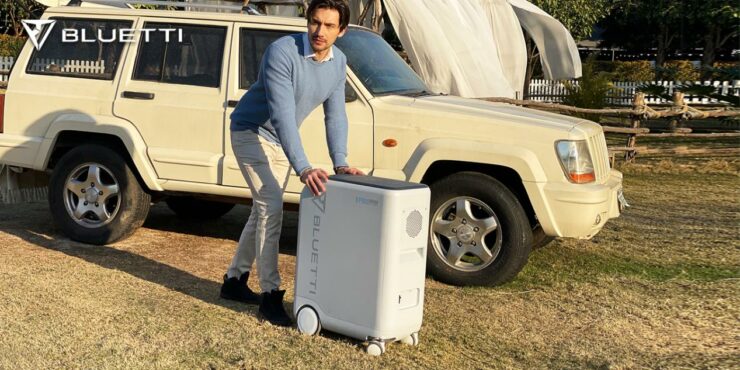 Please subscribe via this link for more information about EP500.

The post Meet The BLUETTI EP500: Giant 5100 Watt Hour Solar Battery That Allows You To Cut The Cord To The Electrical Grid by Abdullah Saad appeared first on Wccftech.