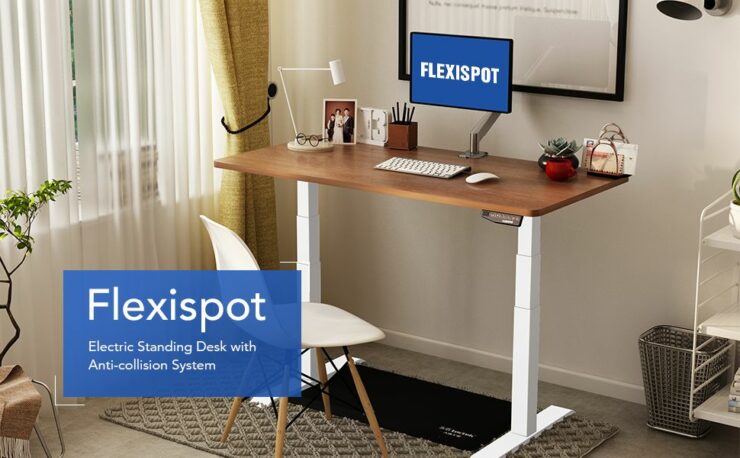 Keith said it best when talking about desks during an earlier review of his. He said that the desk you use is likely the most overlooked part of your set-up, be that for content creation, gaming, general browsing, or – more importantly – for work. A bad desk can eventually lead to disaster, either damaging your health or, even worse, damaging your computer (Priorities, right?). The Flexispot E6, also known as the Sanodesk Pro, looks to have the best of all words, bringing you both a sitting and a standing desk of a high-quality build.

Does the Flexispot E6 manage this and have the quality to justify the cost? Let’s find out. 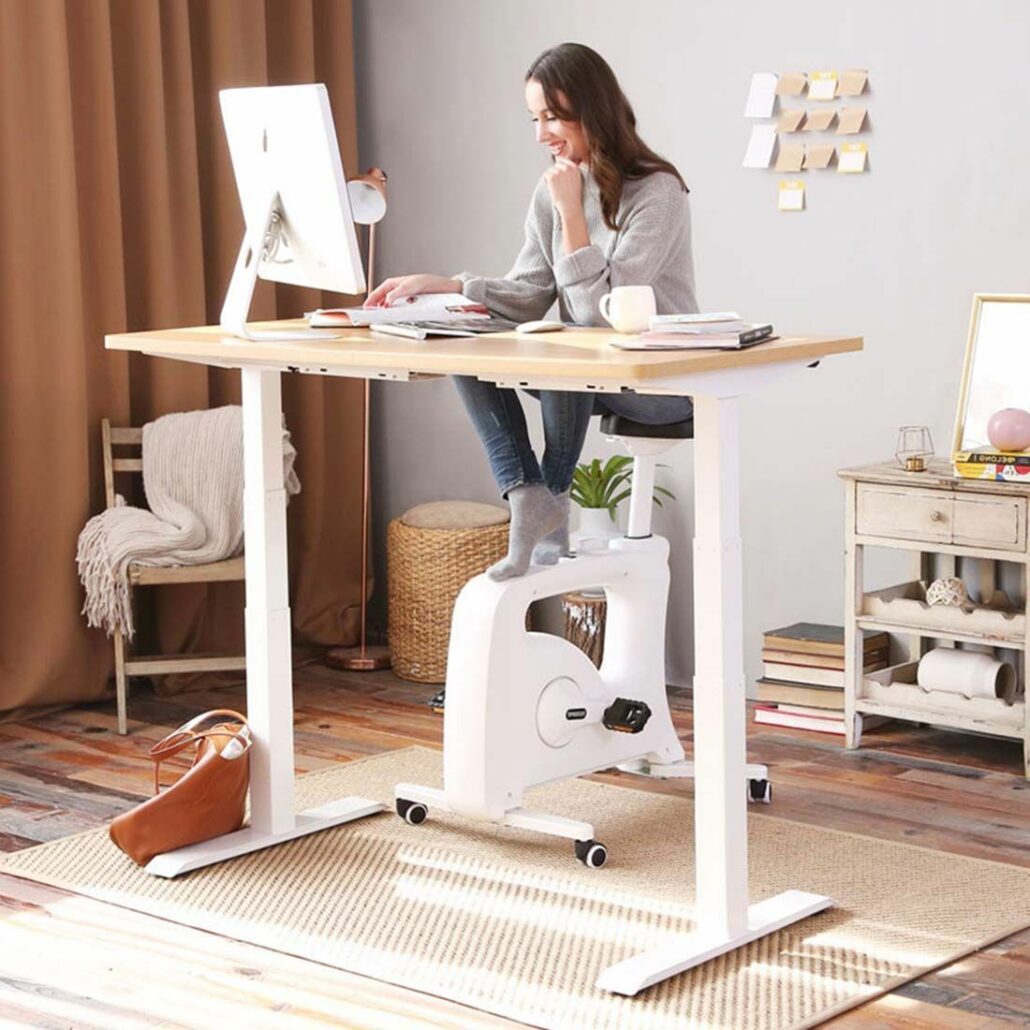 Before we do, I want to talk about standing desks. The science is clear; standing desks aren’t better for you. If you were to stand up for the regular working day without the chance to sit down, you’re actually at a higher risk of heart disease and other health issues. It would be best to have a mixture of sitting and standing. The key element is including some movement at regular intervals. As working from home becomes more of a reality, likely to be permanent as companies measure the savings that can be made, you’re going to need a desk that makes WFH productive while being as healthy as possible.

I’m not going to say that a desk that you can both sit and stand at is the right one for you. That’s depending on how you personally want to do things. Having used this, I can see the merits of a standing desk for short periods of work. Even better is an electronic desk that you can use to sit down when you want to. Lower it at the end of any working shift, essentially storing it away and standing it up if you’re wanting to have the chance to wander around the house, just coming back to the computer to quickly do a little more work as and when you can. This is where the Flexispot E6 shines.

Let’s talk assembly time. Flexispot claims that the desk has a quick five-minute assembly time. It took me a little over one hour. Maybe I’m terrible at following the simplest of instructions (I am), or maybe the instructions aren’t as descriptive as they need to be (they aren’t). Still, it’s going to take somebody used to building these things a good 30 minutes plus to get it set up. Not a bad time; in reality, I can’t complain about that.

The awkward part is more the width of the table. Specifically, it’s setting the supporting plate and beams to the correct width. The supporting beam requires a little fiddling to get to the correct length, and if you’re like me, you don’t want one side of the beam having less of the inner metal than the other side. Maybe my drive for symmetry is why it took me ninety minutes to set up the table, but I apologise for nothing.

Also, to know at what length to set the beam, I had to mess around flipping the whole thing upside down onto the worktop because the instructions told me to fit all of that together without informing me how to figure out what length I needed. Learn from me; adjust the beam length before you do anything else. Then follow the still relatively unclear instructions at steps, such as attaching washers for support on the extended beam or attaching the control box. It’s not impossible to figure out.

I’m honestly not complaining, despite the appearances of my text. Getting it built wasn’t that bad at all. While I suppose somebody using power tools and having everything perfectly laid out could do it in fifteen or so minutes, I can pop on some Feeder and let the music drown out my swearing, mollifying my thoughts of breaking the thing when I realise that I need to unscrew the four screws I just fitted. Multiple times, at that.

I wouldn’t be able to break the thing anyway, at least not packaged. The Flexispot E6 was packed up securely, everything was well padded, and not a single part of it was marked in transit or during my ham-handed attempts to unbox it. Did you like that segway? I thought it was good. So what do you get? Two tools, a whole host of screws, washers, and more. Everything you need is found within the three boxes.

Using the Desk and Conclusion

If there’s one thing I’d have to say about the Flexispot E6, it’s that it’s sturdy. While the weight limit of 125kg may not seem like a huge amount, it’s more than enough. You’re not going to be using the desk as a bed, or a chair, anytime soon – nor should you be. It’s a desk. The simple fact is that this has more than enough strength to hold your PC, laptop, files, a plant and whatever else you want to feature in your workspace. Of course, this will depend on the size of the desk you get.

There are several choices available when it comes to worktops. You can get a rectangular worktop at either 120x60cm or 140x70cm, the worktops being available in black, mahogany, white or maple. The other alternative is a curved worktop, angled upon all sides. I personally went with the rectangular worktop, the larger size, which offered more than sufficient space for a computer, any workbooks and anything you’d require in such a workspace. I prefer my current desk for the shelves I have for my gaming rig, but for a workplace, I can’t fault the Flexispot E6.

A big advantage is that your workspace’s main feature, the cables, can be made neat. Thanks to the cable management plates that come with the desk, you can hide away both the cables that power the desk as well as the cables that power your PC and whatever else happens to be a part of your setup. Fortunately, the desk also comes with a few extra holes, letting you mount a power strip if you want to. Yes, it’s an extra cost, but not much when you consider the £400 you’ve already put into the desk.

Yes, it costs £400 if you buy it from the official site. If you buy it from Amazon, it’s going to cost quite a bit more from Amazon, the price at the time of writing being £530. Is it worth the price? It’s hard to argue about the value of the materials. The Flexispot E6 is incredibly sturdy and stable, with a low noise level and shake when raising or lowering the worktop. It’s also got collision detection, though this isn’t as effective as advertised. Once it hits something solid, the desk will retreat a cm or two, but I didn’t notice great results when placing something that didn’t offer a massive amount of resistance, not until the damage would have been done to such as a plant.

No matter what you use the desk for, you’ll find it more than capable of doing what you need. The only issue I do have is with the handset. It’s functional enough, giving you three different pre-set height options and the ability to give you an alarm for changing if you’re sat down or stood up, but it’s ugly and clunky. Not exactly the biggest of issues, but I’ve got to complain about something, so that’s it. I can’t complain too much about the price when the company is being open about their costs, though it isn’t cheap.

So do I recommend the Flexispot E6? If you’re really after an electronic sit/stand desk, it’s hard not to recommend this. Strong craftsmanship with cable-management options, a simple and easy design but with the added features of collision detection as well as the ability to choose the sort of worktop you like, you could do a hell of a lot worse.

The post Flexispot E6 Review – The Sit and Stand Desk for the Future? by Chris Wray appeared first on Wccftech.