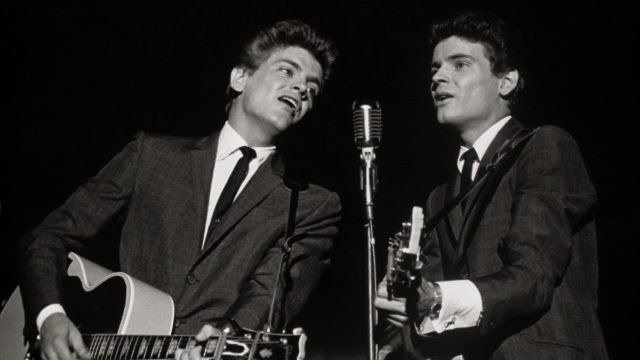 Don Everly, one-half of the pioneering Everly Brothers whose harmonising country rock hits impacted a generation of rock ‘n’ roll music, has died. He was 84.

According to the Los Angeles Times, a family spokesperson said Everly died at his home in Nashville, Tennessee, on Saturday (local time).

In the late 1950s and 1960s, the brothers drew on their rural roots with their strummed guitars and high, yearning harmonies, while their poignant songs – many by the team of Felice and Boudleaux Bryant – embodied teenage restlessness and energy.

Their 19 top-40 hits included Bye Bye Love, Let It Be Me, All I Have to Do Is Dream and Wake Up Little Susie, while performers from the Beatles to Simon and Garfunkel cited them as key influences.

“The Everly Brothers are integral to the fabric of American music,” said Jerry Lee Lewis in a statement. “With my friend Don’s passing, I am reflecting on a life full of wonderful friends, spectacular music and fond memories.”

Don Everly was born in Brownie, Kentucky, to Ike and Margaret Everly, who were folk and country music singers. Phil Everly was born to the couple in Chicago, where the Everlys moved from Brownie when their father grew tired of working in the coal mines.

The brothers began singing country music in 1945 on their family’s radio show in Shenandoah, Iowa.

Their career breakthrough came when they moved to Nashville in the mid-1950s and signed a recording contract with New York’s Cadence Records.

Their breakup came dramatically during a concert at Knott’s Berry Farm in California. Phil Everly threw his guitar down and walked off.

But after Phil’s death in 2014, Don said he felt a spiritual message from his brother before he died.

“Our love was and will always be deeper than any earthly differences we might have had,” Don Everly said in a statement in 2014.

The post <i>‘Bye, bye love’</i>: Don Everly, one of the Everly Brothers, dies appeared first on The New Daily.