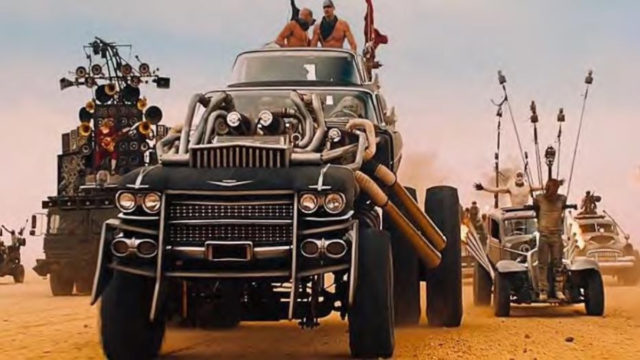 If you’ve ever fancied yourself at the wheel of the mutant love child of a semi-trailer and a hot rod, or a travelling death-metal stage, now is your chance.

Thirteen vehicles from the 2015 post-apocalyptic blockbuster Mad Max: Fury Road are set to go under the hammer this month.

They will be sold together in a silent auction – bidders will have two days to submit their claim to a garage full of Hollywood history.

And what a terrifying garage it will be.

“Blown, super-turbo charged and armed to the teeth with weaponry and War Boys, the machines that outran the end of civilisation have been unearthed in the greatest barn-find ever recorded,” reads the description by auctioning company Lloyds Classic Car Auctions.

From the franchise that put Australia on the map, many of its vehicles remain as iconic as the films themselves, none more so than its infamous protagonist’s 1973 XB Falcon Coupe.

Turned over to the War Boys in the 2015 film, the recognisable black V8 Pursuit Special was transformed into the Razor Cola, a bare-metal, off-road, supercharged version of the furious classic.

The car, also known as Caltrop #6, keeps the original chassis and distinctive scoop of the original, with the addition of a mounted harpoon on the back.

While Max Max fanatics and car enthusiasts may take a liking to the classic car most, the eye-catching Doof Wagon is in its own world when it comes to gaining attention.

Built on the chassis of an 8×8 MAN KAT1 military truck, it served as a rolling stage for the Doof Warrior, who hung in the air in front of a giant stack of speakers while he played a flame-throwing guitar.

If that wasn’t enough, several drums were mounted on the back for some extra bass.

It is not clear if the Doof Wagon comes with the fire-spouting electric guitar.

The War Rig, driven by Charlize Theron’s character, Imperator Furiosa, is best described as a mutant lovechild of a semi-trailer and a hot rod.

With twin V8s end to end, six-wheel-drive and 18 wheels, the Wasteland’s Prime Mover Inc. Tanker and Ball Pig-Trailer is the film’s supreme transporter.

It is unclear of the running status of any of the vehicles, but inspections can be made by appointment, according to the auction website.

Possibly the most extreme-looking vehicle in the Mad Max franchise, the Gigahorse, driven by antagonist Immortan Joe, is also listed.

Two 1959 Cadillac Coupe de Villes welded on top of each other and built on a truck chassis, the Gigahorse is powered with two supercharged V8s for a considerable 1200 horsepower.

Several convoy cars, including Nicholas Hoult’s character Nux’s car; a 1932 three-window Chevy coupe, V8, and the Pole Car; a Pontiac Surfari with 20′ Pole Counterweight, are also up for auction.

The post Iconic cars from <i>Mad Max: Fury Road</i> up for auction appeared first on The New Daily.