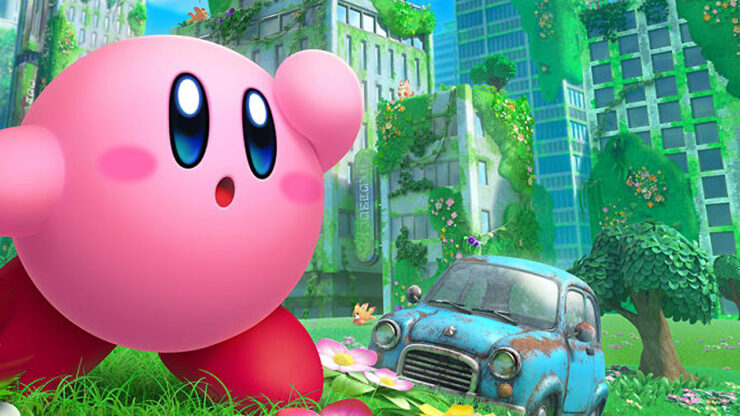 Most of Nintendo’s major franchises, from Mario to Zelda, made the big 3D leap 20 years ago or more, but one franchise has stuck stubbornly to the 2D plane – Kirby. Rumors of a true 3D Kirby game have come and gone for years, but never materialized.

Well, it was leaked earlier in the day, and then confirmed during the latest Nintendo Direct – everybody’s favorite pink marshmallow is making his 3D debut in Kirby and the Forgotten Land. It isn’t just the third dimension that sets Forgotten Land apart through, as the game trades in the candy-colored vistas of past Kirby games in favor of an abandoned, overgrown, semi-realistic world. Yes, believe it or not, Kirby is going post-apocalyptic. You can check out the debut trailer for Kirby and the Forgotten Land, below.

Welp, can’t say I saw this one coming! Need to know more about Kirby and the Forgotten Land? Here’s the game’s official description:

Join Kirby in an unforgettable journey through a mysterious world in a delightful 3D platforming adventure. Take control of the powerful pink puffball, Kirby, and move around freely in 3D stages as you discover a mysterious world with abandoned structures from a past civilization—like a shopping mall?! Copy enemies’ abilities like Sword and Ice and use them to attack and explore your surroundings! What journey awaits Kirby? Take a deep breath and get ready for an unforgettable adventure!

Kirby and the Forgotten Land floats onto Nintendo Switch in Spring of 2022. What do you think Kirby fans (I know you’re out there)? Does this look like the 3D Kirby you’ve been dreaming of?

The post Kirby and the Forgotten Land is the Pink Puffball’s Post-Apocalyptic Full-3D Debut by Nathan Birch appeared first on Wccftech.