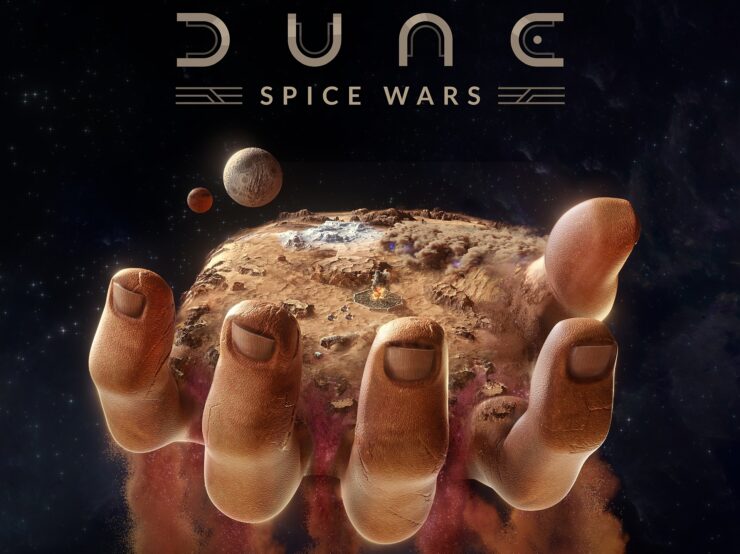 When I wrote my hands-off preview of Dune: Spice Wars, I realised that I was disappointed with myself. Why? Because I wasted the sub-header. I should have saved “spice up your life” for the eventual review or this hands-on preview. Still, my best shot is gone, and now I’m stuck quoting old nursery rhymes. The question then is a simple one: from my experience with Dune: Spice Wars, does it look like it’s from everything nice, or is it made out of slugs, snails and puppy dog’s tails?

Well, Dune: Spice Wars is launching onto Early Access today, and I’ve been able to have a hands-on before this launch. I remember Shiro Games saying that a game would last between three to five hours and, from the games I’ve played, this is understating the time just a bit. I’m generally a slower, contemplative player, so this I expected. However, the slower you go, the more likely you will lose. You may be expanding or holding more spice than any other faction, but there are quite a few ways to win and lose this game. I’m pretty confident I don’t understand them all either.

Anybody familiar with 4X titles will be familiar with various victory types: Military, political, scientific, economic, Cultural, religious; they don’t all apply in Dune: Spice Wars, but there are still a few. You’ve got the Landsraad for politics, which I still haven’t figured out how to utilise, though some factions are better than others. The game won’t tell you this, though. No, Dune: Spice Wars feels very much like the rest of the Dune franchise; it will make you work to understand it.

Let’s talk Landsraad. I’ve won a Landsraad victory as House Atreides, though it was only at the end that I had any clue I was even close to success. I still don’t know how to use influence (or whatever the political currency is named) to further my chances of passing any of the three intermittent acts that pop up; all I seemed to figure out is that the more land I had settled, the more votes I got. I’m saying I figured that out, but I can’t even be sure that’s true.

I can be sure of the military, building around the settlements you capture, and the tech tree. But, before we talk about what I know I’m doing, let’s carry on with something I’m still not au fait with. The other side of politics is espionage. Agents spawn on a timer, or you can gain them by performing tasks in missions that pop up. You allocate them to one of the other three houses, one of the four overarching bodies (Landsraad, etc.) or acting as counter-espionage. The more you have in certain areas, the better the missions you can take on. There’s another currency here to keep an eye on, and the task can genuinely help propel you forward. Again, just a little more tutorialising or description would work wonders.

Still, it isn’t impenetrable, and even a lack of explanation on some aspects doesn’t hinder enjoyment because there’s so much going on. Outside of the Landsraad and espionage, you have the bread and butter of most strategy games, military, expansion and general building. It’s worth noting that you’ll never have a massive army. Since Arrakis is a desert planet, water is a scarce resource – collected by building a structure that catches the moisture from wind, with each region having a wind rating. Battles aren’t grand or epic, but they are undoubtedly tactical.

There’s the usual rock, paper, scissors method of units’ strengths and weaknesses. Add onto this attrition when walking through the non-owned territory and severe attrition when walking through particular deserts, and the tactical elements of the game and map further increase. You can mitigate this as you progress through the tech trees, but this requires you to focus more on the military than something else. There’s a cost-benefit to be made everywhere, which is what any balanced 4X game will throw at you.

Exploring Arrakis and exploring the four factions is pretty interesting at the first leap, but there’s no doubt Dune: Spice Wars has a bit more development to go. Let’s all be honest here, though, Shiro Games have proven that they’ll stick with a game, and the outcome is generally great. It also helps that this is starting from such a strong position. The gameplay is there, even if it’s not all explained as well as it should be.

Some aspects that Shiro Games told me about in my hands-off preview don’t seem to have been implemented. I got to the pole of one map, the place with ice, and I couldn’t figure out how to get the wealth of water it would naturally contain. Still, I figured out the use of spice; it’s just to get the cartel off your back. Keep up with your ever-increasing payments, and your reputation doesn’t suffer. You can also trade some for regular cash or use it in diplomacy (also quite undercooked for now), but it doesn’t seem like the best resource ever.

Still, Dune: Spice Wars looks – even for a game that’s all desert, all the time – sounds and plays as good as a full release. Add in the extra development, some fine-tuning, tutorialising and even the development of additional features, and you’ve got a recipe for a great 4X/RTS mixture that – from this inexperienced Dune person – captures the essence of the source material quite well.