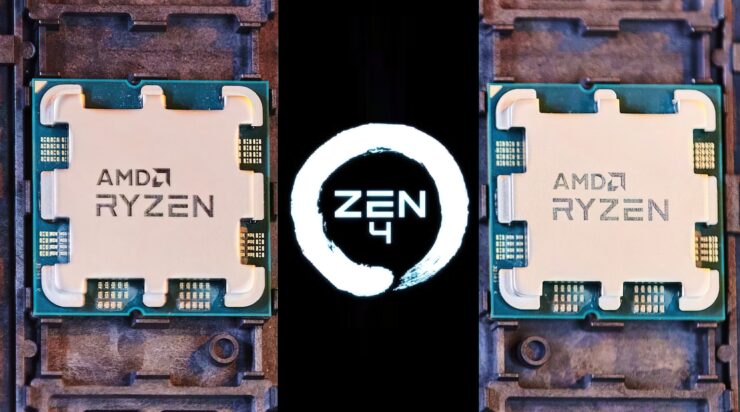 The latest AMD Ryzen 7000 ‘Raphael’ engineering sample desktop CPU featuring 8 Zen 4 cores has been spotted in the Openbenchmarking database. We have seen Ryzen 7000 CPUs appear several times now but the latest entry gives us a more detailed look at the preliminary specifications, and things are looking great for the next-gen AM5 CPU.

The AMD Ryzen 7000 ‘Raphael’ ES Desktop CPU that has been spotted in the Openbenchmarking database is part of the Phoronix Test Suite 10.8.3 which is used for the verification and validation testing phases. The particular CPU doesn’t necessarily say which Ryzen 7000 Desktop CPU this is since it is still a bit early but the platform and OPN code confirms that this is indeed an AM5 CPU sample. 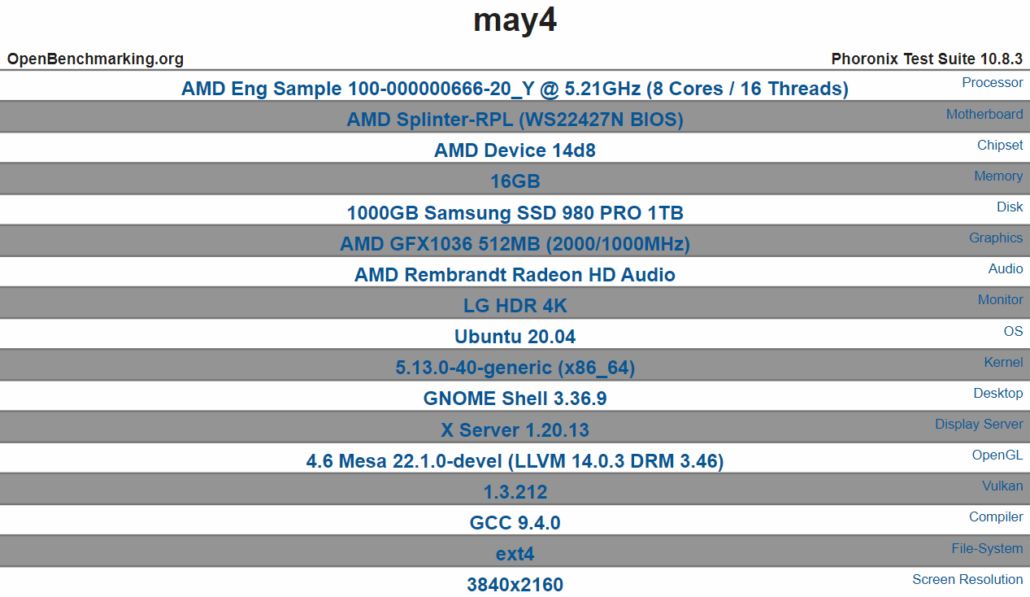 So starting with the details, the specific AMD Ryzen 7000 CPU has an OPN code of ‘100-000000666’ and is the same sample that we reported earlier this year. The core configuration also matches the previous samples with the chip rocking the Zen 4 core architecture with a total of 8 cores & a total of 16 threads. The most interesting part is that this chip was clocking up to 5.21 GHz which is a big boost over the existing chips. Just for comparison sake, the current fastest 8 core Zen 3 chip which is the Ryzen 7 5800X, has a clock speed of 4.7 GHz. So even in its preliminary state, the Zen 4 chip is offering an 11% clock boost. Over 5 GHz wouldn’t be a surprise on a single-core since AMD already showcased a Ryzen 7000 prototype chip running at 5 GHz across all cores back at CES 2022.

See AMD Ryzen 7000 and Zen 4 in action with Halo Infinite! With beautiful gameplay and high framerates, AMD is excited to bring you the ultimate PC and gaming experiences. #AMD2022https://t.co/4GRGyPgedC pic.twitter.com/R6jEPOGxV6

The platform on which the AMD Ryzen 7000 ‘Raphael’ ES Desktop CPU was tested is also interesting on its own. We are looking at a new reference platform known as AMD Splinter-RPL (WS22427N000 BIOS), 16 GB of memory (most definitely DDR5 since that’s what AM5 will support), and a standard storage/OS configuration. Another aspect of the Ryzen 7000 ES Desktop CPU is that it rocks a iGPU and not just any iGPU but one with RDNA 2 cores. 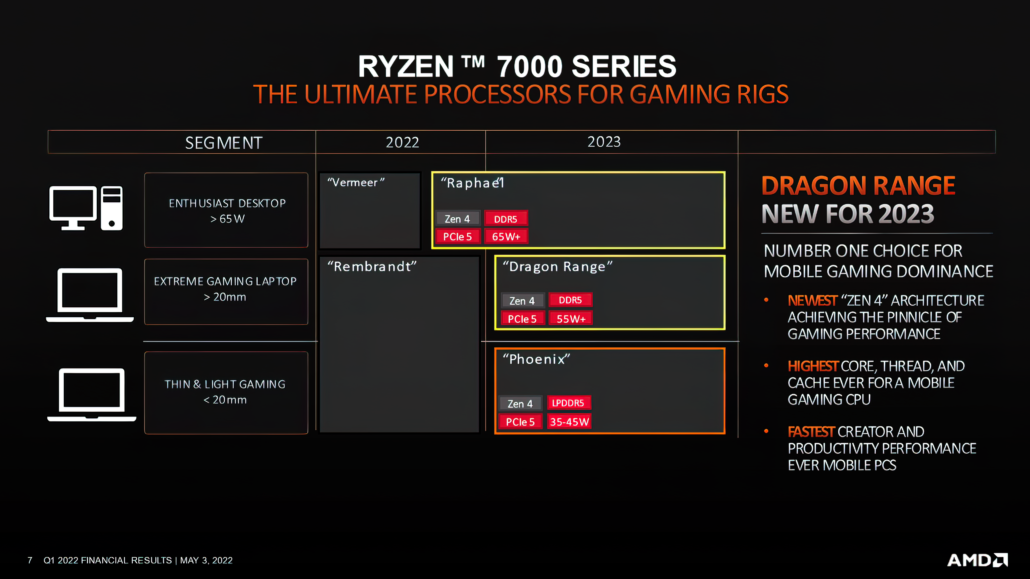 AMD’s Ryzen 7000 ‘Raphael’ Desktop CPUs are indeed expected to offer an iGPU based on the new RDNA 2 graphics architecture. Some have stated that this iGPU will feature either 2 or 4 CUs so 1 or 2 WGPs. The particular iGPU is listed as ‘GFX1036’ and has 512 MB of shared memory. The clock is rated at up to 2000 MHz though we aren’t sure if this is a correct listing or not. The iGPU shares its core design with AMD’s Rembrandt APUs and hence, offers a similar Radeon HD audio suit. AMD is going to be introducing Raphael in two variants, Desktop and Mobile. The Desktop parts will retain their Raphael codename while the Mobile parts have been renamed to Dragon Range. Both will be sharing a similar die, similar to Intel’s Alder Lake-S (Desktop) and Alder Lake-HX (Mobile) SKUs. So it is likely that a similar iGPU configuration will be seen on Dragon Range chips too. 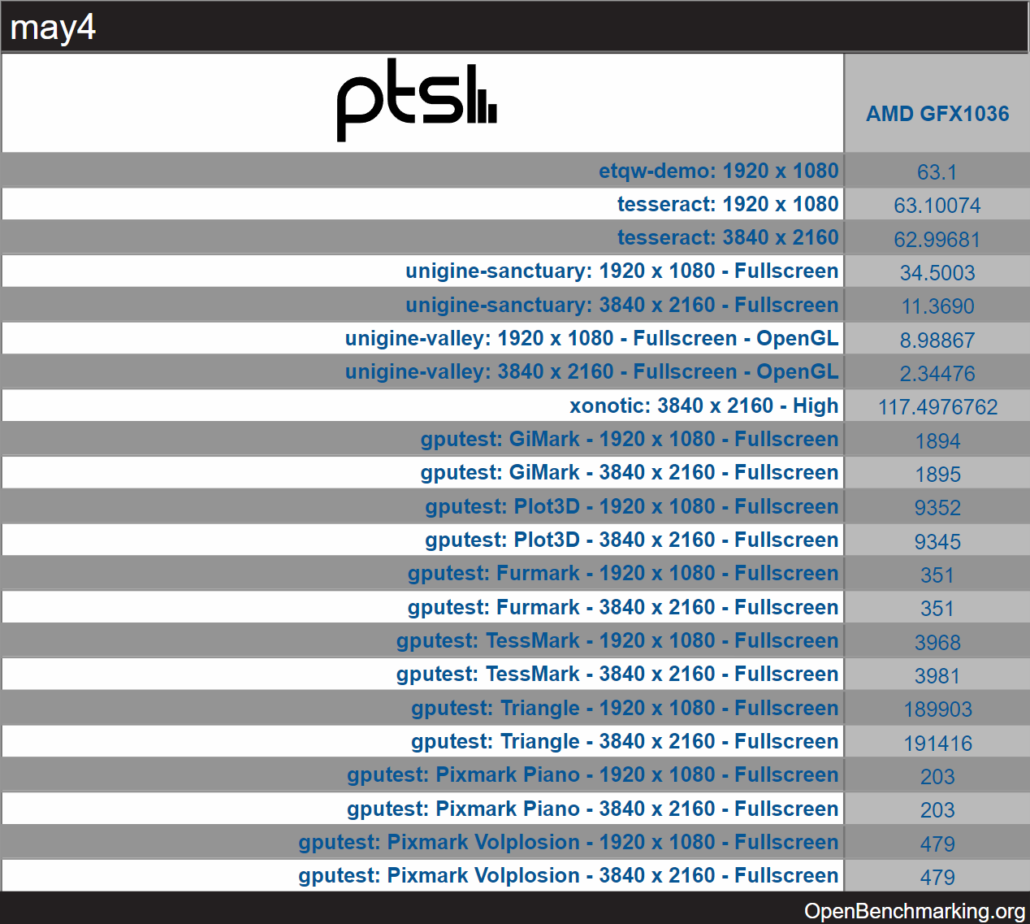 Finally, the performance of the iGPU was revealed within the OpenBenchmarking database but is not of much use since the clock speeds were unknown. A 2-4 CU RDNA 2 iGPU will be able to give a performance on par with AMD’s Vega iGPUs, especially thanks to the higher TDP limits with Ryzen 7000 ‘Raphael’ chips expected to come in 170W flavors. With that said, it looks like AMD will have a big unveil for Raphael and the AM5 platform at Computex 2022 within a few week’s time.