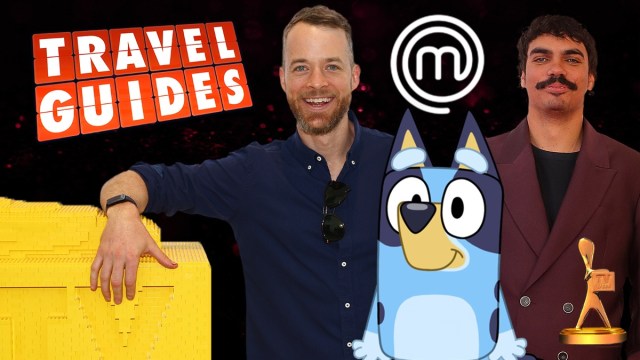 When comedian Dave Hughes introduced the seven nominees for the biggest award in Australian television on Sunday night, he mused about why Lego Masters host Hamish Blake was up for the most popular personality.

He joked that here’s “a man whose wife [skincare entrepreneur Zoe Foster Blake] is so rich he can play with Lego all day”.

The Sydney-based actor, author and father of two, Blake, 40, won the top prize, the Gold Logie.

Blake also delivered a gong for the Nine Network, with Lego Masters peer-voted the most outstanding entertainment or comedy program.

So why have these people and shows struck a chord?

And if that wasn’t enough, halfway through the night and at the end of a tribute package for the late, great Bert Newton – who died in October and was the face of the Logies for decades – his wife Patti handed Blake the inaugural Bert Newton Award for most popular presenter.

“I didn’t think that I was going to be able to do this tonight. It’s still very raw,” Newton said.

“I will never get over him not being here. But I know that he is with me,” she said, saying the Logies was “his baby … he absolutely loved it”.

Humbly, in his acceptance speech, Blake said winning was “one step in Bert’s enormous shadow”.

“This is so special, thank you Patti. I don’t think I’m the only one who is a bit emotional after having seen that. That bit of Bert doing what he was born to do, what he was meant to do, this is a crazy honour,” he said.

“I came home from work and Zoe asked what everyone built today and I said they built amazing things and she said, ‘What did you do?’. I was dressed as a vampire and rolled around on rollerblades,” he said.

Backstage after the close of the official ceremony just after midnight, she gave television’s most likeable larrikin Blake the “ultimate compliment”.

According to TV Blackbox‘s Steve Molk, while Newton’s star has faded understandably because he has passed, it has left “a vacuum”.

“[The award] could’ve been filled by someone far more duplicitous, and what we’ve ended up with is someone who is actually quite lovely,” he said.

Feel-good largely unscripted television shows including Ten’s MasterChef, I’m a Celebrity … Get Me Out of Here! and Have You Been Paying Attention? as well as Nine’s hilarious Travel Guides, all took home Logies, as did the hugely popular ABC sports presenter on News Breakfast Tony Armstrong for most popular new talent.

Although it’s not a prime-time show, let’s include the ABC’s animated Bluey – the Brisbane-grown show with a worldwide audience – which won a Logie for Most Outstanding Children’s program.

Molk said the long-running partnership and 20-year friendship with Andy Lee meant we got to know Blake through TV shows such as Caravan of Courage and Gap Year shows, and years spent entertaining audiences on FM radio.

“The Hamish and Andy shadow actually looms pretty large over the Australian TV landscape,” he said.

Armstrong is relatively new to television, but both “are pretty nice blokes … No one has a bad word to say about them”.

“The draw is they are just so enthusiastic,” Molk said. “They haven’t let the machine of TV wear them down. Tony being reasonably new and Hamish who’s been around for a while … it’s TV and a bit of fun.

“Tony has to report on serious stuff too, but at the same time we know he’s going to be enthusiastic. He’s happy to have fun with people and make sure he’s going to make the most of it.

“You can spot a fake a mile away on television, and I think now that social media is such an important part of any media personality’s profile, we would have had sniffed out whether Tony or Hamish were just putting it on.”

A perfect time to see these feel-good shows?

Married at First Sight will always rate well, and he suspects there will be a big test when the revitalised My Kitchen Rules returns.

“We get a glut of angry, competitive, even bitchy shows, which then only highlights the shows that play positive (like MasterChef or Travel Guides), and so the pendulum swings toward that way and we’ll get a heap of them.

“It’s not necessarily that the content is all positive, rather it’s that the interpersonal relationships between contestants/people are positive or at least supportive.

“For a show relaunching itself like MKR that was really competitive and snarky, if they go positive they can ride that wave and probably succeed because of it.

“We are heading in the direction of a glut of happy and heartwarming shows because that’s what the audience is loving at the moment.”

Its supportive trio of judges, Andy Allen, Melissa Leong and Jock Zonfrillo give audiences what they want – emotional, hard-working amateur cooks delivering out-of-the-box ideas for recipes cooked to a deadline.

And the Ten Network’s slot of prime-time nightly viewing helps when families are mostly gathered in the one spot.

Social media users love the show, posting every day their preferred dishes, how they’ll experiment and try new ways of cooking chicken and fish, and why a Japanese hibachi grill should belong next to an outdoor barbecue.

Molk says the Lego Masters appeal lies in it being “legitimately a prime-time family show”.

“The fact it has talent like Hamish and Lego designer Ryan [The Brickman] McNaught, is why it got the appeal it does.”

Have You Been Paying Attention? – Most Popular Comedy Program

Over 90 minutes every Monday night, host Tom Gleisner asks a select panel of stand-up comedians, radio and TV hosts to unpack the week that was in the news.

Panellists including regulars Sam Pang, Ed Kavalee, Tony Martin, Anne Edmonds and Fisk‘s Kitty Flanagan compete on buzzers to answer questions and someone is always a winner at the end of the night.

Interspersed with Gleisner’s clever video questions from celebrities and studio guests, the banter is fresh, funny and irreverent.

Although they sat at a table at the back of the auditorium inside the Queensland’s Gold Coast Convention and Exhibition Centre – which often means they don’t win an award – Travel Guides won the Logie, beating Better Homes and Gardens (Seven), Bondi Rescue (Network 10), Gardening Australia (ABC), Love It Or List It Australia (Foxtel) and The Living Room (Network 10).

Molk says the Travel Guides resident family – parents Mark and Cathy and their adult children Jono and Victoria – puts it down to “supremely good casting and excellent producing”.

“That’s what has made [the show] so successful and so industry accepted,” he said.

“What you see is a whole bunch of different groups of people just being the exaggerated versions of themselves, which is exactly what you want in any kind of reality TV.

“You want people to turn it up.”

The post Why <i>Lego Masters’</i> Hamish Blake and a host of feel-good TV shows struck a chord at the Logies appeared first on The New Daily.