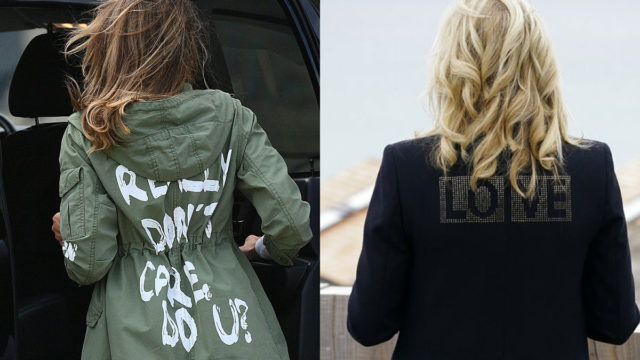 The first lady has made a single-word statement as she touched down in the UK with her husband President Joe Biden ahead of the G7 summit.

Dr Jill Biden wore a black jacket emblazoned with the word “love” as she met with British Prime Minister Boris Johnson and his wife Carrie on Thursday (local time).

“This is a global conference and we are trying to bring unity across the globe and I think it’s needed right now, that people feel a sense of unity from all the countries and feel a sense hope after this year of the pandemic.”

Dr Biden wore the same jacket at the beginning of her husband’s presidential campaign more than two years ago.

The first lady’s glittery message of unity was quickly compared to a sartorial statement by her predecessor Melania Trump in 2018, with some even asserting it was an intentional dig.

As reported by The New Daily at the time, Ms Trump infamously wore a $52 cargo green parka from Zara that read: “I Really Don’t Care, Do U?” during a trip to a Texas detention centre for migrant kids.

Though she reportedly didn’t wear the coat while meeting with incarcerated children, photos of her graffitied back while embarking and returning from Washington sent the media into frenzy.

The move sparked intense scrutiny, perhaps made worse by then-president Donald Trump’s explanation that it was a message directed at the “fake news media”.

“I REALLY DON’T CARE, DO U?” written on the back of Melania’s jacket, refers to the Fake News Media. Melania has learned how dishonest they are, and she truly no longer cares!

In response to the backlash, Ms Trump’s communications director, Stephanie Grisham, rapidly slapped down the president’s explanation with assurances that the jacket held, “no hidden message”.

Meanwhile, Dr Biden tends to embrace a wardrobe with a direct message.

She once wore black skinny jeans with the word “vote” written down each leg while on the campaign trail.

The G7 is known as a meeting of world leaders, but the Group of Seven summit also involves obligations for the partners of those very important people.

According to a thread of tweets from Dr Biden’s communications director, Elizabeth Alexander, she has a full schedule and will have ample opportunities to spread that “love from America”.

The first lady will participate in a series of G7 spouse activities. She has already had tea and a walk on the beach with the Prime Minister’s wife and made an address to the family’s of military veterans.

She said an “exciting part of the visit” will happen on Sunday, when the Bidens are set to meet Her Majesty the Queen at Windsor Castle.

Mr Biden is also making an impression during his first overseas trip as President.

Dr Biden proudly told reporters on Thursday that foreign policy is her husband’s “forte” and he had been “studying for weeks”.

It seems to have paid off so far, with Mr Johnson describing him as “a breath of fresh air”.

The post Jill Biden’s message of ‘love’ sparks contrast to <i> that </i> Melania Trump jacket appeared first on The New Daily.