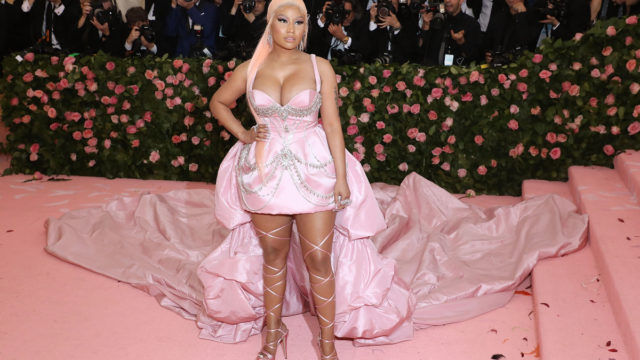 Western Sydney Health has made an impression on the internet with a clarifying swipe at a strange tweet from American rapper Nicki Minaj.

The NSW local health department posted a screenshot of a bizarre post from Minaj, while debunking her claims about “swollen testicles” caused by the COVID vaccine.

Minaj had informed her 22 million followers on Tuesday that her cousin was refusing a vaccination because his friend “became impotent” after one, subsequently ending his relationship.

“My cousin in Trinidad won’t get the vaccine [because] his friend got it and became impotent,” Minaj wrote.

“His testicles became swollen. His friend was weeks away from getting married, now the girl called off the wedding.

“So just pray on it and make sure you’re comfortable with [your] decision, not bullied.”

The Twitterverse went mad, with more than 100,000 retweets, many poking fun at the bizarre claim.

Western Sydney local health district intervened after the tweet was picked up by anti-vaxxers, the Seven Network has reported.

The health authority responded on Tuesday with a side-by-side image of the common side effects of the vaccine, and a screenshot of Minaj’s tweet with the caption: “Things that don’t happen after a COVID vaccine”.

The listed side effects include pain and swelling at the injection site, headaches, muscle pain, tiredness, fevers and chills, and joint pain.

The department promised to “leave the rapping to Nicki Minaj, if she leaves medicine to doctors and scientists”.

On Wednesday, molecular biologist Raven Baxter, Ph.D, under the twitter handle Dr Raven the Science Maven, took it a step further with her response to the health department.

Dr Baxter posted a video of herself rapping a hip-hop song about vaccines and antibodies, called Antibodyody AntiBody Song.

“Or maybe leave the rapping to the scientists who are willing to educate and not alienate people who are still hesitant about the vaccine”, Dr Baxter wrote.

The song’s lyrics break down immunology and microbiology terms, and include explanations such as, “I got the vaccine so you got me on the right night. B cells know the haters when they see ’em so it’s fight night”.

Or maybe leave the rapping to the scientists who are willing to educate and not alienate people who are still hesitant about the vaccine?pic.twitter.com/ElFayiCAwd https://t.co/4jBw82jmbP

Among the many responses to NSW Health Irish Times columnist Brianna Parkins, with her take on 2021.

“Western Sydney Health fact checking Nicki Minaj about her cousin’s enlarged testicles is not how I thought this year would go but here we are,” Parkins wrote.

The health department quickly replied: “Same here [to be honest]”.

Leading US immunologist Dr Anthony Fauci was among the medical experts who debunked the singer’s claim about impotence and vaccines.

“She should be thinking twice about propagating information that really has no basis … except a one-off anecdote, and that’s not what science is all about”, Dr Fauci told CNN.

Minaj defended herself from the backlash, saying she’s not an anti-vaxxer.

The Anaconda rapper pointed out that she has also tweeted that she is intending to get vaccinated and definitely recommends the vaccine.

She also hit back at headlines that claimed she had not attended Tuesday’s Met Gala because she was not comfortable being vaccinated, explaining that she had told news outlets she was not travelling because she has a small child.

It comes as NSW is set to reach 80 per cent first-dose COVID-19 vaccination coverage of eligible residents on Wednesday.