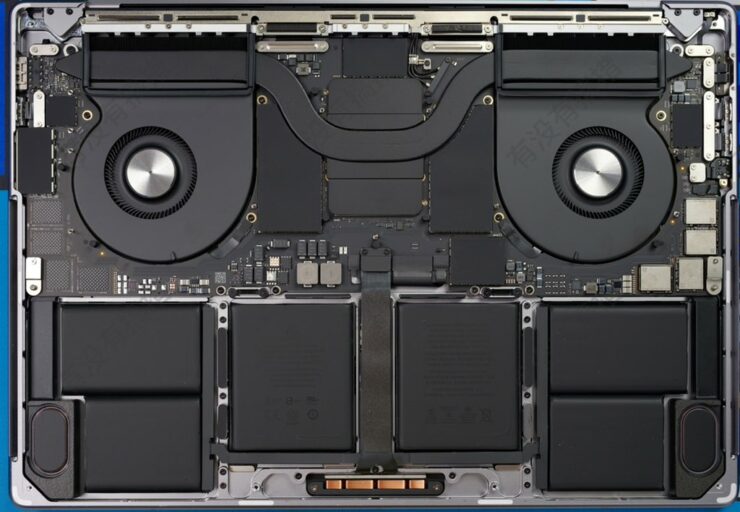 Here is a first look at the cooling solution Apple used to keep the temperatures of the 2021 MacBook Pro under control. We also get our first look at the M1 Max, which is the company’s fastest custom chipset to date.

The disassembly of the 16.2-inch MacBook Pro was published on Twitter by notable tipster L0vetodream. The brief teardown shows that the M1 Max is cooled using a dual-fan and single heat-pipe solution. It is not the beefiest cooling we have seen on a notebook computer, but that is likely because Apple’s custom silicon does not require it. According to the company, the new thermal system can move 50 percent more air at lower fan speeds and says that users will hardly need it, implying the energy efficiency of the M1 Pro and M1 Max.

On other high-end machines, such as gaming laptops, using multiple heat pipes, large heatsinks, and fans that ramp up almost immediately is a common sight. Other manufacturers have resorted to using vapor chamber coolers to effectively control the power-hungry components’ heat without compromising on the thickness of the machines. As for the M1 Max, L0vetodream points out that the SoC is surrounded by four memory chips, and also compares the die size with a 1 Yuan coin.

As you can tell, the unified RAM is a part of the M1 Max, allowing the SoC and memory to work together and carry out operations much faster. For those that do not know, the M1 Max has a maximum memory bandwidth of a whopping 400GB/s. Overall, the cooling solution is nothing different than what we have seen on other machines, with one major difference being that those cannot deliver the same performance as the 2021 MacBook Pro without running into the thermal throttling blockade.

We will wait for a more extensive teardown in the coming days and show our readers in detail on what changes Apple has made to the internals, if any, so stay tuned.