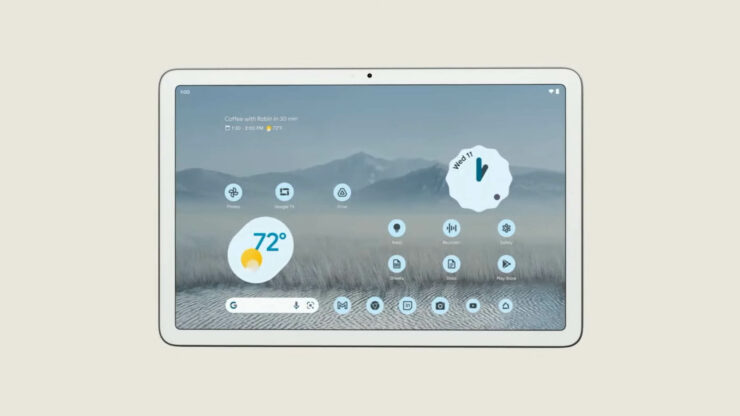 After discontinuing its last Android-powered tablet, the Pixel C, in 2015, Google aims to re-enter the market with the Pixel tablet, which according to the company, will be powered by the custom Tensor chip.

Google Executive Claims the Pixel Tablet Will Be ‘the Perfect Companion to Your Pixel Phone,’ Suggesting Some Form of Integration Between the Two Devices

There is little information surrounding the Pixel tablet, but Google’s Rick Osterloh hints that there could be some form of seamless integration between your Pixel device and the slate, as the executive states that the upcoming product is designed to be the ‘the perfect companion to your Pixel phone.’ The Pixel tablet features rounded corners but no flat edges like the iPad Pro or iPad Air series, and disappointingly, the bezels are much larger compared to Apple’s lineup, almost falling into the iPad 9’s backyard.

With the Pixel tablet expected to launch sometime in 2023, it will be powered by Google’s Tensor SoC. Our assumption is that since it will arrive next year, it will likely feature the second-generation Tensor chip that will be featured in the upcoming Pixel 7 and Pixel 7 Pro. Given that Android tablets are only given some importance by the likes of Samsung when it comes to the premium market, Google will have to provide some encouragement for customers to pick this one, such as affordability and an attractive list of features.

Here’s a sneak peek at our upcoming Pixel tablet

The teaser also showed that the Pixel tablet would only sport one camera at the back and front, but no megapixel details, video recording resolution, or other details were shared. This is not surprising, especially when it will be nearly a whole year before Google officially launches it, but at least we know a little bit about the features side. For starters, there will be multi-tasking options, along with support for both keyboard and mouse, hinting that at the bare minimum least, Google aims to market this product as a notebook alternative.

Images shown in Google’s presentation hint at a split-screen view, but without knowing the display size, we cannot comment on how favorable it will be for the user. Hopefully, we will get to know more about the Pixel tablet in the coming months. While the design is a bit underwhelming at first glance, perhaps Google can impress its audience in other categories.

The post Google’s Unveils Its Pixel tablet, Seven Years After Discontinuing Its Last Model, With Launch Set for 2023 by Omar Sohail appeared first on Wccftech.