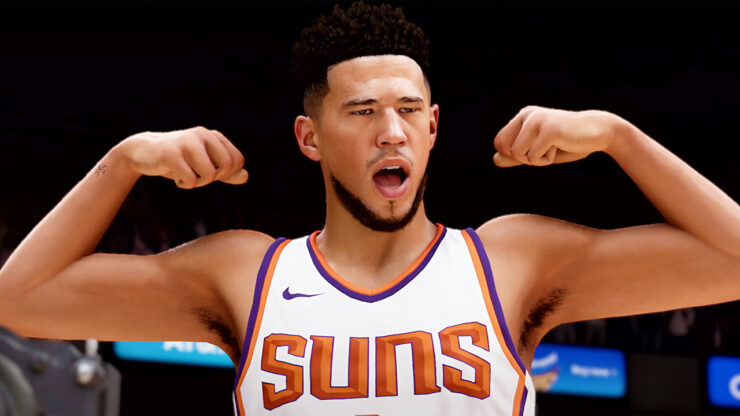 We got our first NBA 2K23 details earlier this month, but aside from a few screenshots, no gameplay of the new roundball game was shared. Well, thankfully an actual NBA 2K23 gameplay trailer has now been rolled out, providing a peek at cover star Devin Booker, LeBron James, Steph Curry, Giannis Antetokounmpo, Luka Doncic, and more. While hardly a complete visual revamp, NBA 2K23 looks to push the series realism another step further. In particular, the game’s WNBA stars look more true-to-life than in the past. You can check out the NBA 2K23 gameplay trailer for yourself, below.

Need to know more? You can get the lowdown on NBA 2K23’s dizzying array of special editions here, and returning Jordan Challenge mode, below.

“Along with Michael Jordan returning to grace the covers of NBA 2K23 this year, the game will also reintroduce The Jordan Challenge, which encourages players to recreate 15 iconic moments from Jordan’s illustrious career. All ten of the original Challenges from NBA 2K11 have been completely rebuilt from the ground up and will make their return this year – alongside five new iconic Jordan moments – for an entire new generation of players to experience. These Challenges take advantage of more than a decade of technological leaps to provide a completely new way to play through Jordan’s accomplishments – all housed within its own game mode.

The Jordan Challenge also elevates an array of spellbinding performances across Jordan’s college, NBA, and Team USA Basketball careers that players can experience across all 15 Challenges and includes unique video vignettes that come with special commentary from an array of NBA luminaries: Jordan’s teammates, opponents, and other sports personalities, who saw him do it live and can bring to life his legacy to a younger generation of NBA fans.”